(Wa-sarri-a), we we told,  is one of the most quaint yet essentially Moroccan towns in the country and after being here for two days.... They ain't ly'in. The bonus of its location is the stretch of Atlantic coast where trade winds prevail almost all year keeping it dreamy from heat. It's a prime location also for surfing, but has managed to escape mass tourism like Agadir, Marrakesh or Fez. A Mecca for hippies in the 70's, it's still an artist town and is hot on the trail of independent travelers like us - off the radar to tourist busses.

We rolled into town late. Too late. Our goal was to arrive BEFORE dark. We weren't even close to arriving at sunset. Except for the donkey carts riding down the road in complete darkness with no lights whatsoever..... we did lots of last minute swerving. We both had to pee sooooo bad too and Morocco isn't known for its plethora of rest areas. I'm not sure I can explain the fear of peeing in a random animal field in the dark of night in a foreign country.

So, anyway...TMI... we pulled into Essaouria and it was "going on". Maybe it is Moroccan spring break,  Mardi Gras or something, because there were people everywhere....live music....venders... food... you name it.

We opted for our usual hostel. Yes, we still like hostels when we can find good ones. And this was typical of most, it did not disappoint. The guys running it live in pajamas....or Moroccan clothes, which are actually huge man-pajamas. They are travelers that work to earn their room and board.  This one had a great old-school hostel vibe; people hanging out, our new friend Ash playing guitar and singing.....like the old days before SmartPhones and WiFi ruined everything.

Atlantic Hostel. Here we are after arriving in the dark. It took us a while to find it because the side alley ways are tiny. John, from Manchester England is one of the managers of the hostel. He was "having a pretty chill time downstairs with everyone and didn't really feel like moving"....and said exactly those words.  Then ,"there is an open room upstairs...here, its one of these" and handed us a wad of keys, "Go ahead, I'll grab you two beers for when you return."

How to spy on a Moroccan wedding.

A 17th century military town, Essaouria is now a major fishing port.  The huge ramparts (fort walls) that face the sea still have original Spanish cannons attached to them. The Medina is laid back during the day while most are at the beach or sleeping and lively at night when its cool manageable.

Meet Othman. He owns Othman Shop inside the medina in Essaouria. He knits cool hats, designs and makes jewelry and buys some of the coolest art we've seen here so far. He had us for tea ...twice. And he makes the best green tea out of all of the Moroccan hipsters we met...which was one. 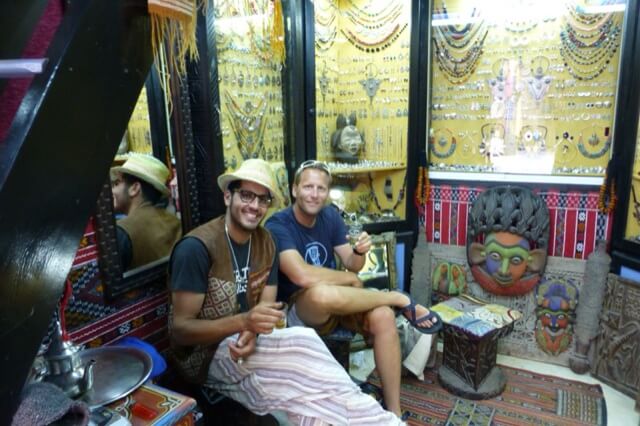 Neither of us has had very much in the Moroccan food category until now. Brian now likes olives. My body has to endure bread with every meal. And we are hoping to try something super weird and gross at some point on this journey. There is always something weird and gross we run across at least once or twice a trip.