Getting to Trujillo, we had our first experience with the Peruvian Bus system. Oi! I, (M) got a scratch on my leg that got infected in about 2 minutes. Two greasy-haired, smelly men that sat in front of us, smashed us with their SUPER EXTRA-reclining chairs that no one else seemed to have.  Picture: our seats do not move or recline At ALL.  Theirs (special? broken?) recline ALL the way back - and we mean all the way back. Their heads were in our laps. Tough Luck Gringos.

So we are cruisig along, trying to sleep while War of the Worlds blasted so loud the TV vibrated.  Who knew Tom cruise could yell Spanish fluently.  At apx 1 am, Our Bus crashed into a pile of rubble that was randomly placed in the middle of the highway. The sounds of screams and little Peruvians flying up into the air and filled the silence. The bus was now high-centered on top of the rubble which broke through the radiator, and punctured a tire. Turn an 8 hour ride into 12. Amazing how normal these incidents become. If you even plan on self planned travel, throw your time schedules out the window and roll with it. This is way more entertaining. Hoards of people were trying and push the bus as it teetered ... liquids spewing all over the place. And here we are, Standing on the side of the road, in who knows where...watching it all happen without a lick of Spanish. We didn't take any pictures because it would have been weird and honestly it was too dark. But we have added some imagery to help you visualize it.

You get the idea.  Taxi cabs started circling like sharks, picking up people that knew where they were going. No one could tell us where we were. Neither of us speaks Spanish and none of them spoke English.  Shit.  I dont know how many other ways we could ask "Where are we?" or "How far is Trujillo?" 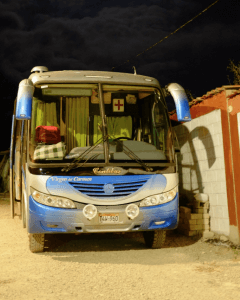 Long story short, hours later we were bussed to an undisclosed bus station, where we ended up sleeping, not IN the bus station per-say, but outside in the lot. They emptied the bus, locked the gate, turned off the lights and the station mamager went back to bed. So there we slept, in white plastic lawn chairs, locked in by a giant fence, alone...until 6am the next morning. (Mind you, we were supposed to arrive at 11pm - so time tables be gone.)

The best part is, we had NO idea where we were.....so we didn't dare venture out until the bus station opened the next morning. And it gets even better....we then hailed a cab, told him the name of our hotel and he drove about 4 blocks and stopped. Seems we were less than a 5 minute cab ride from the crash site to town and 4 blocks from our actual hotel - while we slept in the cold dark of the ababdoned bus station lot. Oh the joys of travel. Most exciting 30 sols ($3) we've ever spent. WELL, ANYHOW...Trujillo is so much better than we expected it to be. A colorful and beautiful colonial city with brightly painted architecture and a relaxed feel. We spent one day in the downtown area and took a day tour of 2 ruins. The ruins here  are very different than the ones we've been seeing. These are OLDER than the Inca sites we saw around Cuzco and Machu Picchu. Not as grand, but still impressive given their age.
Brian got the Guinea flu and had to hold up for our first night in our hotel room. Ironically, we caught the Husker bowl game on Spanish ESPN. Vamonos Huskers!  Costigo!  What are the odds? Thanks for tuning in. Adios!