This morning we woke up overly excited for food. The guesthouse lane leads straight to the main drag that circles the walled city just a few blocks away. Mornings are so extremely peaceful in this country. The air is warm, damp and smells sweet. Birds chirp and motor bikes groan far off in the distance filling the background with constant low rumbles. Lined up along the narrow street are small cafes, stores and bakeries.

Yesterday morning Brian and I chose one of the few cafes that were open and walked into the back where we sat under a giant palm plant. While eating breakfast we meet Charlie. A local's local who is maybe in his late 20's –early 30’s. He was average height, thick in build and round in belly. It seemed everyone that walked or drove by the restaurant would crank their head around looking hard for something or someone, then hell in, "Charlieeeee". He could have been the Mayor of Chang Mai for all we knew. Talking our ear off as we ate our breakfast, we found out that his sister owned the place and that he offered informal versions of the Local tour into the Highlands. On a handshake, We took a risk and booked a "tour" with Charlie - We agreed on the price ($35 a person).

We will be traveling over 5 hours north. And for 2 days we will spend time in northern Thailand’s highland jungles (near the boarder’s of Laos and Burma). "It’s what I do. No problem… Let’s see with five of you…" Charlie paused, eyes looking up at the vine and tapestry ceiling, “hmmm…what do you want to do... “  This was not a question to us, but more of an internal conversation he was having with himself. “We can go white water rafting, ride elephants in the jungle, bamboo raft. We’ll see some temples, visit Laos and Burma, long boat on the Mekong River, Opium museum in the Golden Triangle and sleep in a long neck tribe village. That is pretty much what the other tours do but we’ll be on our own schedule. Food, transportation, and lodging are included”.  There you have it. That’s how you book a trip in Thailand. No brochure, no contracts, no deposits. Just a handshake for 2 days in the middle of the no-where jungle with a random guy named Charlie who we met having breakfast.

We were getting pretty worried out track would be a fail because Charlie was tarting to get pretty drunk. Well, we did get to swim up to the waterfall,  the white-water was no Colorado, but still fun due to the surroundings and the elephant riding was pretty cool because they let us drive. The bamboo rafting was slow and relaxing, until a thousand spiders scattered onto us when the water flushed out their home inside the bamboo tubes.

What started out as a pretty cool experience was changed by the purple goo. What we discovered on our trek was if an elephant misbehaves, or wanders away from the trainer, a whack on the ear, face or leg would teach them. The weapon of choice each trainer carried was a long metal stick with a hook on the end. Hence the small gouges and scabs all over the animals face and legs along with rips in their ear flaps – all over, purple goo. For some reason the elephant ride began to lose its luster for us. And to be honest, we are pretty sure we will never do one again. 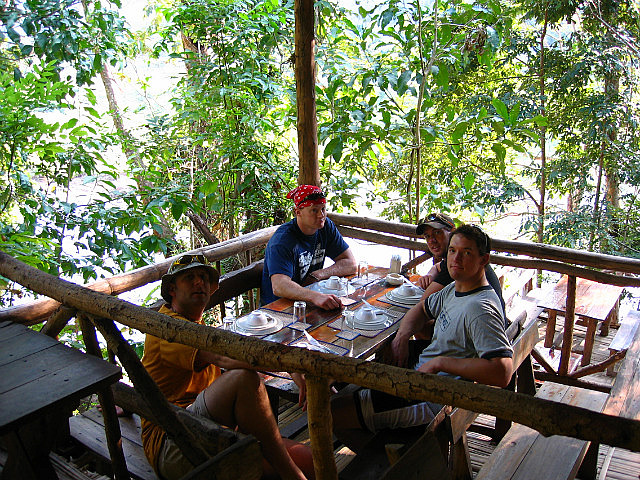 Still Day 1: Lunch. Up the steps we went to a tree house style restaurant for one of the most delicious lunches I have ever had. God, Did I say how much I love the food in Thailand - yet? Again? We each had a huge plate of salad, chicken curry, soup, some sort of shrimp stir fry, bread, fresh fruit and fresh squeezed juices. Unbelievably tasty. It was great hanging out there and relaxing for a while, along the banks of the Taeng River. 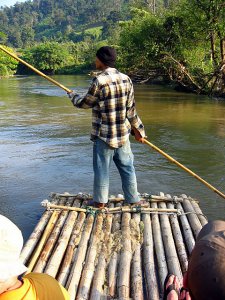 The bamboo rafting was one of the things on the list we were pretty excited for. Not because it’s an intense adrenaline rush down a raging river, but because it is cultural - real Thailand. A History: The Bamboo rafts have been used down this particular river and others like it for hundreds of years. The raft is a series of bamboo poles, tied together with twine and made into a flat platform-like surfboard of sorts approximately 10 feet long by 4 feet wide. 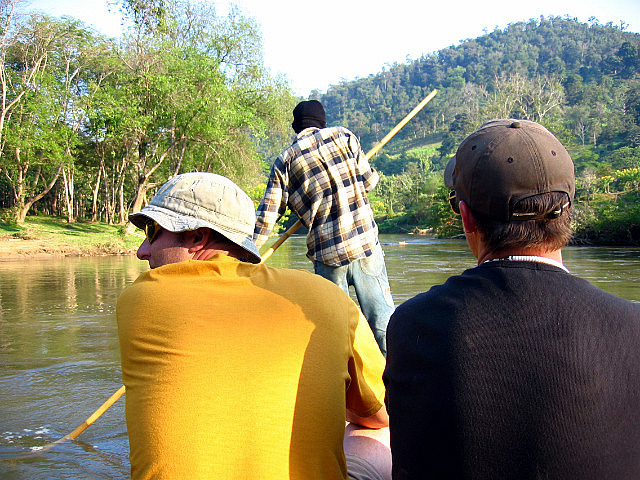 There was a pile of rafts stacked along the shore. They did not look like they had been used in a while. Our guide grabbed the first one off the top and dragged it to the water’s edge. We all piled on and filled the boat.

Spiders began to spill out of the sides of the raft and were headed for anything high enough to get them out of their watery grave. Every second or two we were slapping spiders off our bodies. These were not just tiny every day variety spiders, but 8 leggged monsters of all sizes. Too many to count. 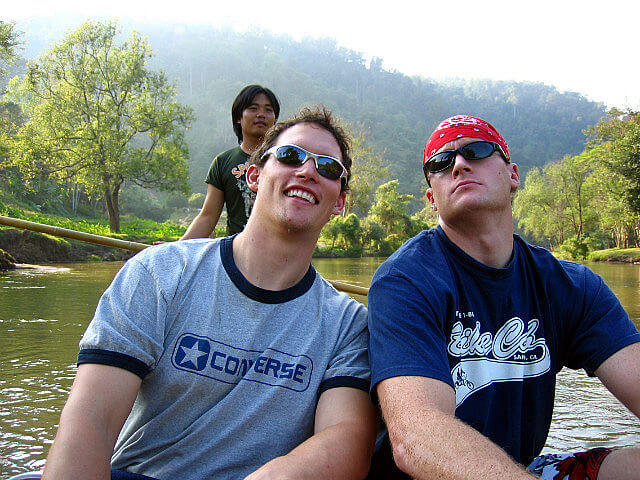 You know the phrase "His eyes were the size of saucers?" Moe's eyes were the size of saucers. And with eyes wide, he pointed at Bob’s foot, mouth as open as it could get. On Bob’s ankle, clinging for dear life, was a black spider so big, it would make National geographic wince. It was so large that its legs disappeared around the sides of his leg, exposing ...only ....body. Bob’s arms started flailing like a rotary fan and it took all of 2 seconds for that spider to hit the river with impressive speed.

Our little group, we were told, would be sleeping as guests in a small Kayan tribe village for the night. The stay in the village was by far the most exciting. Not only because of the experience, but because our guide, Charlie, hammered down 2 bottles of Thai moonshine on the way there. When we arrived it was dark and all we could see were flickering torchlights up in the jungle hills. During dinner Charlie was mildly aggressive and yelling stories at us so immediately after we tried to ditch him by spinning him around in circles then hiding in the dirt pit bathrooms while he barely navigated himself around a tree. And the story doesn't end here.... When he eventually found us in our hut, he ripped the door off its hinges and tried to crawl in bed with Bob. Hahaha hahahaha hahahah. You can't pay for enough for this kind of entertainment. 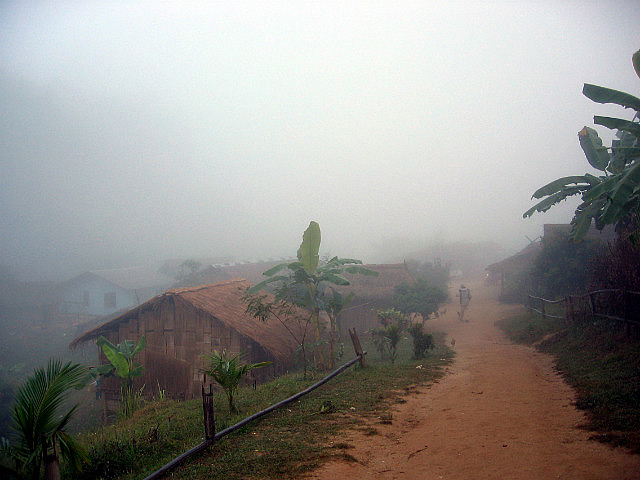 Day 2: We woke up to the cool misty morning of the mountains - and watched the villagers set up for the day. Neatly decorated stalls were filled for the villagers to sell their wears. All was better and Charlie made up for his "indiscretions" by making all us breakfast and seeming perfectly fine. How someone can ingest that much grain alcohol and not have a hangover - let alone, not die, is truly impressive.

Getting there and back was also a story to be told. Trapped in the back of a closed in pick-up truck (5 hours each way) ...definitely a first. Light headed, queasy...We are all hoping there are no long term effects from the constant plume of diesel exhaust we have been inhaling.